Bringing out the Best in People - A.C.Daniels (summary) 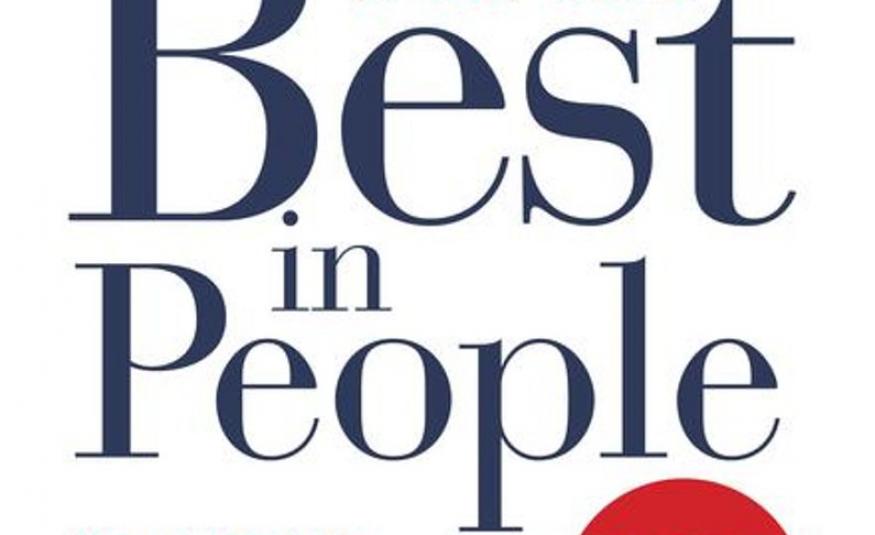 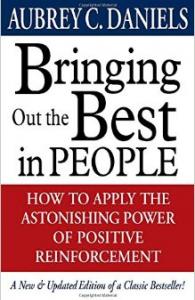 In Bringing out the best in people, Aubrey Daniels describes the power and simplicity of positive reinforcement. First, he describes the ABC theory (Antecedent, Behavior, Consequence), which forms the basis for his change management theory. Positive reinforcement has everything to do with the consequences for the individual after he showed the behavior that we would like to see. To be able to change behavior, Daniels writes, we need to predefine both the behavior we would want to see in our organization as well as the consequences for showing them.

Let´s start this article with what the ABC THEORY entails. A person finds himself in a situation in which he is challenged to act (this is the antecedent). He now has the possibility to choose how to react on that specific situation (to show behavior). ABC theory says, that the behavior that he will show is dependent on the expected result for him personally, a.k.a. the consequences. These consequences can either be positive (reward) or negative and the consequences of the behavior he chooses today, will impact the choice he makes in similar situations tomorrow.
There are three factors that influence behavior based on this theory. It matters whether the consequence is positive or negative. It also matters whether the consequence is certain or uncertain, and whether you will experience the consequence directly or with delay.
To change behavior, the best consequence are positive, are certain to happen and without any delay. In other words: we should positively reinforce desired behavior as soon as we see it.

Daniels differentiates between FOUR TYPES OF CONSEQUENCES that can be used to learn, or unlearn behavior.
Positive reinforcement means that the person who shows the behavior that we want to see is rewarded with something that he likes to receive.
Negative reinforcement means the person shows the wanted behavior because he wants to avoid a certain consequence.
Punishment means, that unwanted behavior is unlearned by giving the person something he does not want to receive.
A Penalty is to unlearn certain behavior by taking something from someone that he would rather keep.
Daniels stresses that the first way of motivating people to change their behavior is by far the most effective, because it is the only strategy that can motivate people to show the wanted behavior on the long term.

The next chapters of the book describe how to DEFINE THE BEHAVIOR THAT NEEDS TO BE REINFORCED. This is the link between the behavior shown on individual level and the organizational goals on the highest level, also known as Hoshin kanri (Jackson, 2006) (Webers, 2010). The goal of the hoshin is to link the vision and goals of the organization to KPI´s and behavioral indicators on individual level (Daniels, 2000) (Webers, 2010).
This means, that when standard work is defined, we do not only document what people should do, but also how. This is especially important for indirect functions, for which it is relatively difficult to determine somebodies performance. (See also my article on leader standard work)

So WHAT IS THE BEST WAY TO POSITIVELY REINFORCE? Daniels describes a few topics to think about.
Material rewards are personal, so what can be rewarding to one person, can be a punishment for another. If you want to reward someone in this way, get to know the person so that you know what the person enjoys receiving.
Material rewards should be unlimited, which means colleagues should not be competing for the same rewards. Having to compete for a rewards enforces the wrong behavior, namely that people will try to hide knowledge from each other to prevent somebody else from receiving that reward.
Complimenting is the easiest and cheapest form of positive reinforcement. A pat on the shoulder, a thumb´s up, a “thank you” or “well done” whenever you catch somebody showing the right behavior, these are the most powerful consequences one can get, without delay and without negative associations.
Do not combine compliment with critique or advice. The famous sandwich structure in which critique is balanced with two compliments is very confusing. Critique should be fast and to the point, and so do compliments. When you mix them, the person experiences neither of them.
Use the dead-man´s-test to make sure you are reinforcing behavior. When a dead man can do it: it is not behavior.

DOING NOTHING ALSO INFLUENCES BEHAVIOR. When a person shows extraordinary good behavior, and does not get any feedback from colleagues or managers, that person will eventually stop showing that behavior. The opposite is also true. When you stop positively reinforcing the behavior you want to see, people will stop behaving that way.
I´d like to link this principle to the kaizen behavior that is of major importance within every lean initiative. Every time somebody hands in an improvement proposal, he should be positively reinforced by both implementation and verbal compliments, even when this idea does not necessarily brings you the big savings you are hoping for. When the individual does not get positive reinforcement on his behavior of thinking about improvements, he will stop showing that behavior and the organization might not get his greatest ideas.

To summarize his theories, Daniels describes 5 STEPS TO MAKE CHANGE EASY AND EFFICIENT.
1. Plan positive reinforcement for wanted behaviors in a new system or process
2. Eliminate positive reinforcements for behaviors that are no longer appropriate because of the change of systems or processes.
3. Positively reinforce new behavior more than you think is necessary to make the change stick.
4. Expect a fallback of behavior. It is not uncommon for people to fall back into their old habits. You have to simple keep reinforcing.
5. Expect emotional bursts. When you stop reinforcing certain behavior, people are naturally going to react emotionally. Talk to the people and listen to their feelings, but always keep on reinforcing the new behavior.

The ABC theory teaches us that a direct, personal pat on the back is the best way to reinforce new behavior. It is therefore, according to Daniels, easy to plan a cultural change. Simply define the behavior that you would like to see and ask all managers in the organization to compliment their team member whenever they see that behavior.
Even better would be to put positive reinforcement in the form of complimenting others as a KPI on Leader Standard Work and discuss this topic with every manager regularly.

REFERENCES:
Daniels, A. C. (2000). Bringing out the Best in People - How to Apply the Astonishing Power of Positive Reinforcement. New York: McGraw Hill. (order this book)