In their book Influencer, Joseph Grenny, Kerry Patterson and co discuss a wonderful model to increase your influence as a manager when you want to make a change. The authors introduce three key elements for successful change: focus and measuring progress, identifying crucial behaviours that you want people to show, and leveraging 6 sources of influence. It is these 6 sources of influence that are most extensively described in the book and that are also discussed in this article. 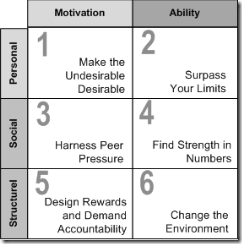 THE SIX SOURCES OF INFLUENCE can be summarized as shown in the table in the figure above. There are two columns: Motivation and Competence, and these are then split into 3 sources from which the motivation and competence originate: Personal, Social and Structural. This creates 6 courses and in this book the authors describe how people have been successful in creating change because they have applied strategies in several of these categories.
For example, the personal motivation of 1 lean manager is not enough to change an entire organization. The challenge of a culture change is that the entire social system is motivated to change, and that the organizational structure encourages that motivation.
In addition, not only the personal ability to do something in a new way is important, but the majority of the organization must be able to apply the new way and the environment to invite that new behaviour. To better understand this relationship, let's look at the 6 sources one by one.

The first source of influence is PERSONAL MOTIVATION. The first necessary step in any change is that someone wants the change themselves. If you want someone else to change their behaviour, he or she must want it. Never has anyone successfully implemented a cultural change simply by obliging people to be motivated. As a manager you must replace dictatorship for dialogue. Give people the choice instead of forcing them and offer them to try new things to experience what it is like to work according to a new pattern. Success stories can help convince people to want to experiment.

The second source of influence is PERSONAL ABILITY. Wanting to show a new behaviour is one thing, but without knowing how to do that, there will be no change. Skill comes through experience, through practice. And a mistake made in many organizations is that organizations think that training is enough to create that ability. Deliberate practice is what is needed to be able to teach people skills such as giving feedback, learning to talk to each other about errors, and performing a 5x why when you encounter a problem. A running example: simply running as many hours as possible is not as effective in improving half a marathon time if you prepare your training plan in such a way that you schedule interval training (for speed), and long endurance training (for fitness) and speed training (for muscle growth). By practically targeting different facets, you will become better.

The third source of influence is SOCIAL MOTIVATION and within this theme it is therefore about using the social system to encourage desirable behaviour. Group pressure is an important theme in this chapter. If you want to quit smoking, but your friends put a cigarette right under your nose every night, you are less likely to quit smoking. To bring group change about, the first step is to set a good example. Lead by example and be the one person who brought about change. The second step is to find the organization's early adapters that are open to change and want to join you. The early adapters, not the innovators, are the Rogers curve group that you want to take with you to make the change grow in a larger group.
Finally, it is important to create a culture of open communication. If you can't talk about something, you can't change it either. If people do not dare to give each other feedback, a positive aspect of group pressure can be absent, and a change will never spread from a group of people to the total population.

The fourth source of influence is SOCIAL ABILITY and this theme is about using the intelligence of the group to make the change a success. A group is almost always smarter than an individual, and together a group can get more done than all individuals individually. Influencers therefore look at what other people need to support change, rather than just trying to change the entire system in their own way.

Source number 5 is STRUCTURAL MOTIVATION and this part of the model is about the fact that as a change agent you have to ensure that the system rewards desirable behaviour instead of undesirable old behaviour. In addition, intrinsic reward is better than extrinsic reward. In fact, the authors warn that when you reward desirable behaviour with, for example, a small bonus, you send the message that the behaviour is not part of the normal way of working, but something special, something extra. Do not use money to convince people to compensate for the fact that you failed to motivate people intrinsically. In addition, it is important to reward desirable behaviour (continuously), and not just long-term results. Behaviour is always 100% within the circle of influence of a person. Results can turn out the way they are for many external reasons.

The sixth and final source of influence is STRUCTURAL ABILITY. Personal competence is about self-practice, social competence about helping each other practice, and structural competence about how your physical environment (the non-human factor) can help you practice with desirable behaviour. Our environment has a major impact on our behaviour. The size of the bowl of popcorn that we buy in the cinema determines how much we eat, not our hunger. When the street you are walking in is full of waste, we also throw our waste out a little faster than when we are in a street that is new and clean.
"Make it visible" is the credo of the authors, and lean experts like me mainly use this source of influence to create a culture of continuous improvement in our organization. 5S, team boards, autonomous management are all tools that help us to adapt the environment of people in such a way that they are encouraged to show a certain behaviour: namely that of responding to deviations from the standard.

Making change is difficult. Changing yourself is difficult, changing another person is even harder, let alone hoping to transform an entire organization. The 6 sources of influence that you can tap into help a change manager to define different strategies and thereby considerably increase the chance that the change will succeed. The book is full of examples of people who have managed to make major changes. From reducing crime in a city to almost eradicating diseases such as HIV and the Guinea worm. This book is highly recommended! 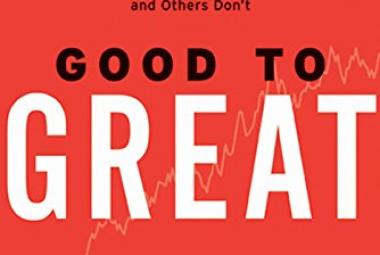