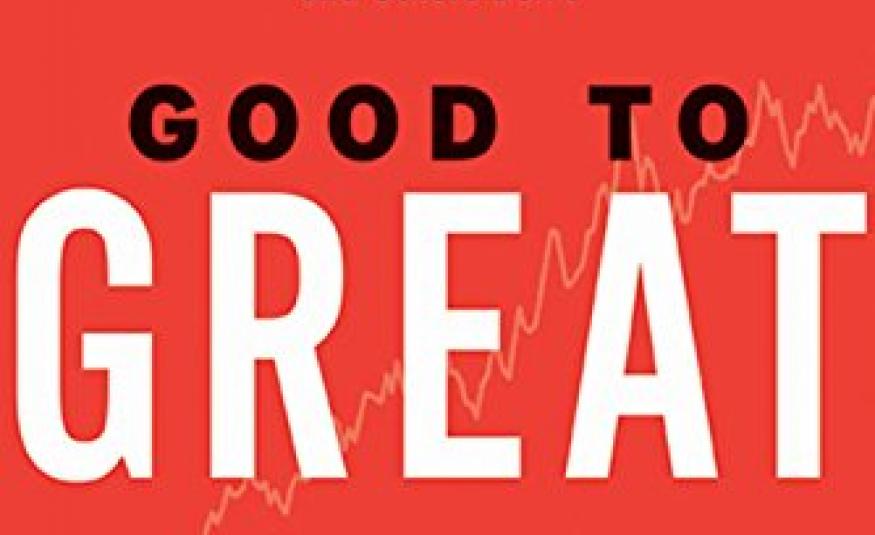 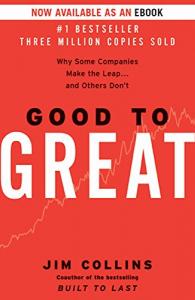 In his book, Good to Great, Jim Collins describes 6 concepts that a leadership team should apply to transform a good organization into a great one. Collins sorted out the 11 most successful companies of all time based on their performance compared to the market (minimal 3 times better, up to even 18x time better) for a minimal of 15 years in a row (to sort out personal leadership influences of one CEO).
The statistical change that these successful 11 companies would each have of these 6 concepts by change would be 1:27.000.000, a clear argument for the rest of the world to take a look at these.

The first concept is LEVEL 5 LEADSERHIP. Leaders of the 11 great companies are generally silent, reserved and shy (also see the five levels of Leadership by Maxwell, 2011), the opposite of what we read about in the media about ‘celebrity leaders’ who came into a company to ‘save’ the day. One example Collins describes is the celebrity leader Jack Welsch of GE. He did a fantastic job, as described in a lot of books and articles, but GE did not make it to the top 11 companies. Their competitor Circuit city did. Have you ever heard of them? They beat GE more than 6 times in terms of year on year performance!
Level 5 leaders put organizational goals before their own, in contrast to your average manager who puts his own ego or goals before the rest. According to the Collins, this egocentrism that we see in our average manager is the reason why 2/3 of companies world-wide are poorly led.
Also interesting is, that 10 out of 11 companies selected their top management team from inside the company. Thus, hiring a hero celebrity leader from outside the company does not have scientific value for transforming your organization into being a better-than-good company (also see Liker, 2004).

The second concept is FIRST WHO – THAN WHAT. First you should choose the people who should be on the bus, second you choose where the bus is driving. A good vision is irrelevant if you do not have the right people on board to achieve that vision.
Big organizations only keep those employees who are willing to follow the company independent of where the bus is going. People choose to work for a team of good people, the other people that are on the bus, not the direction in which the bus is going. If you don’t sort out your team beforehand, you will have difficulties when you need to change direction. The people who chose to be there for the direction will be resistant.
Sorting out the right people for the business results in on average 5x less job-cutting programs, because teams work together on achieving their goals independent of the direction they are being send.

When the right people an on board, it’s time to consider concept three: CONFRONT BRUTAL FACTS. To determine where the bus should be going, we need data. Ignoring trends on both organizational level as well as industry level has led to too many bankruptcies as we speak.
In the organizational culture of the 11 great companies, everybody is encouraged to follow the facts, also when they are afraid their manager would not like the outcome.
Four tips to create a culture of truth are: ask questions, start a dialogue, ask 5x why instead of 5x who (also see: Panneman, 2017) and build in red flag meganisms.

Concept number 4 is about developing your own HEDGEHOG CONCEPT to help you define the vision of your organization. The goal is to simplify a complex world into one simple idea, and then put all your resources on that one thing. Protect your concept like a hedgehog protects itself, from all distractions and political forces from outside.
The Hedgehog concept consists of a combination of three aspects: a passion for the product of service that you want to develop, the possibility to be the best company to deliver it, and the possibility to make money with it. Mind you, this does not have to be inside your current core business.
Then choose one KPI to measure the success of your concept. A big dashboard with 20 KPI is disctracting and does not provide any focus to your company. Next to that, none of the 11 great companies Collins found had ‘growth’ as a goal.
It is not an easy task to find your hedgehog concept. It takes about 4 year to develop.

Concept 5 is creating A CULTURE OF DISCIPLINE. Concept 2 is about hiring disciplined people, concept 4 about disciplined thoughts, and this concept is about disciplined action.
Train your people to work with discipline. People with discipline find the right thing to do themselves and do not need a lot of management. A disciplined organization needs little bureaucracy.
Give people the freedom and responsibility to work on their tasks and a consistent system with clear constraints to work in, and they will florish!

Finally, concept number six is about USING TECHNOLOGY AS ACCELERATOR for realizing your hedgehog concept.
Technology is never the holy grail that can transform a bad company in a good one. It should facilitate your vision. It cannot make you (or anyone) a level 5 leader, it cannot transform the people in the bus to disciplined people, it cannot make you look at the facts, help you define your hedgehog concept, nor can it create a culture of discipline. All that needs to be taken care of first.
The greatest companies chose their technology to support their hedgehog concept, not to create it. Technology is an accelerator of momentum, not the creator of it.

Good to Great is a standard work that should be mandatory for all top managers. Even though this book has been a best seller since it was published in 2011, my own experience tells me that most top managers are not practicing these concepts yet. Which is a shame, because of this; most companies stay mediocre on the short term, and will eventually be overtaken or outrun by competitors who do.

Collins, J., 2001, Good To Great – Why some companies make the leap… and others don’t, New York: Harper Collins Publishers inc. (order this book)