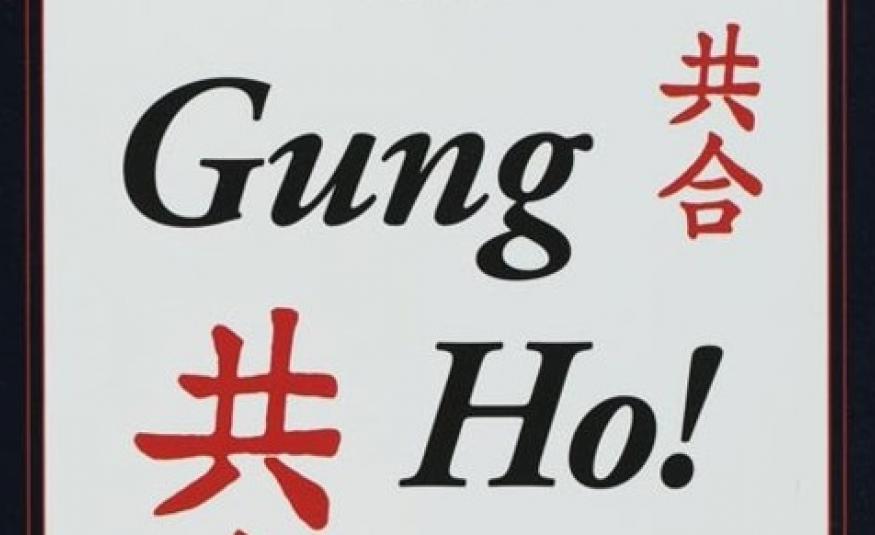 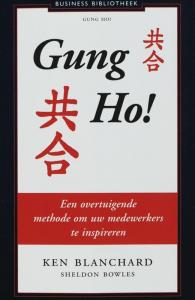 Gung Ho (K.Blanchard and S.Bowles) tells the story about an American factory in which old Indian wisdom created a cultural Change which changed the organization from a money loosing firm to a profitable business. The Gung Ho (which is Chinese for ´working together´) program is based on three animal attributes: the spirit of the Squirrel (1), the way of the beaver (2) and the gift of the goose (3). Blanchard and Bowles describe in this novel that implementing these three principles result in motivated personal which lead to better output.

In the story, plant manager Peggy is coached by an old Indian man called Andy. The factory in which they both work has the worst results of all the factories the company owns, however Andy´s department was the best performing department of all factories. Naturally, Peggy wonders what Andy´s secret to this success is, and she lets Andy take her into the forest every weekend, to learn about the three principles of Gung Ho.

The first principle is the foundation of Gung Ho: the spirit of the squirrel. In autumn, we can see squirrels busy preparing for winter by gathering acorns. How come these squirrels are so eager? They have a goal which they value. They need the acorns to survive winter. This goal motivates the squirrels to work so hard, it makes the work they do worthwhile for them.
The spirit of the Squirrel is focused on the need for a sense of community. In an organization, the spirit of the Squirrel translates into the following: employees know their job contributes to something important in the world (1), they are working together to a common goal (2) and everybody plans and acts based on common norms and values (3). The difference between goals and values is that goals are focused on the future (where do we want to go) and values represent the now (the way we behave and expect others to behave).
Managers should be focused on what happens on the shop-floor instead of acting based on numbers which show up on a screen. Leading based on numbers is like watching a soccer game by only looking at the scoreboard instead of the players and the ball.

The second Gung Ho principle is the way of the beaver. When employees have the spirit of the squirrel which gives them purpose and direction, the way of the beaver describes how work should be done. Beavers build their home with an entrance under water to protect them from harm and a dam is built to keep the water at a certain level to prevent the entrance from running dry (the goal of the beavers). When de dam is broken, all beavers immediately start repairing it. There is no beaver telling others what to do and nobody undoes the work of another beaver. They trust each other in their dedication towards the common goal of the group.
Three suggestions for implementing the way of the beaver in an organization are: provide clear boundaries within the team can act (1), listen and act upon thoughts, needs, feelings and dreams (2) and make sure team members are both competent and challenged (3).
Managers should include all team members in improving processes because they always know their working environment better than the manager does.

The third Gung Ho principle describes the gift of the goose. When you see a flock of goose flying, you always hear them croak. They croak in the water, in the air, and there is always more than one goose croaking. What message are they sending each other? They are cheering one another, a gift us humans can learn a lot from. Cheering is free and leads to intrinsic motivation.
Next to cheering, congratulating for accomplished success is an important instrument to intrinsically motivate people. Three suggestions for implementation the gift of the goose are: making sure the congratulations are TRUE (Timely, Responsive, Unconditional and Enthusiastic) (1), keeping scores to know when to congratulate who (2), and the understanding of the following creative interpretation of Einstein´s formula  E=MC2 (Enthusiasm = Money x squared congratulations).

The story does not tell whether or not the factory got back into black numbers, however Peggy improved so much, that she did get more time to keep on improving its performance.
The three lessons described in this book are important for all managers, no matter what industry you work in. built a culture of trust, where people cheer and motivate one another in working towards one common goal. As a manager, you can set the example.