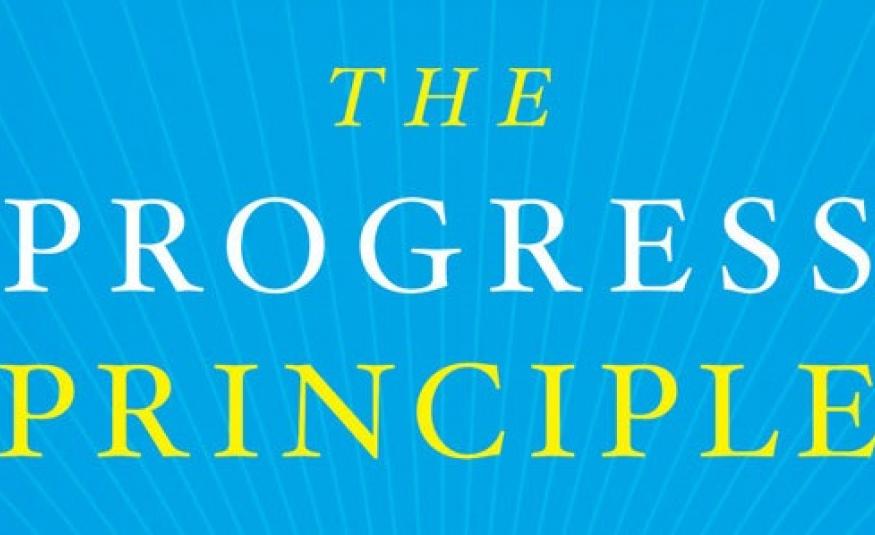 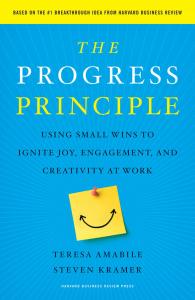 In the progress principle, Teresa Amibile and Steven Kramer describe the secret behind truly productive people: progress. In a period of many years, they collected daily journal entrees from different people in different organizations, for a period between 9 and 38 weeks. With that, they collected roughly 12,000 diary entrees, which gave the authors the opportunity to analyze when participants described their day as productive and when not.
This article describes the progress-loop that the authors describe, and what you can do in your organization to positively influence this loop.

THE PROGRESS LOOP plays a central role in this book. A positive inner-work life leads to higher performance in terms of creativity, productivity, engagement and collegiality. This in turn leads to progress of meaningful work. You now perceive your day as positive, which improves your inner-work life, which strengthens the loop again from the start.

The first block in the Progress loop is INNER-WORK LIFE. Amabile and Kramer define this term as how you as an individual experience your life at work. With inner, is meant, that emotions are involved that are not always visible to the outside world. With work life is meant, that it is not only an emotion about a single task, but about your experiences in office live in general.
There are three components that describe inner-work life. Emotions that are felt during the work, your perception on daily life at the office, and motivation that you have for working on a specific task. When all these three components are changed for the better, you improve the four components of performance: creativity, productivity, engagement and collegiality.

How can you IMPROVE THE INNER-WORK LIFE of your team? The authors describe 7 Catalysts to support the work, and 4 methods to take care of the human aspects at work, the so called nourishers. All these factors have influence emotions, perception and intrinsic motivation in a positive way.
Let’s start with the seven catalysts to support the work. First, clear goals are important, so that it is clear from the start what the goal of the task is. Second, autonomy is important, to know how much space an individual or a team has in in executing the task. Third is the amount of resources that are available and fourth the time in which the task needs to be finished. Help from colleagues or the manager when the team gets stuck is number five, which is related to facilitating reflection and learning between individuals and teams, number six. Finally, it is important that ideas and knowledge can flow between people in the organization, to facilitate improving the work in general.
The four human factors to improve inner-work life are: respect, encouragement, empathy and affiliation. You can show respect by acknowledging good work and to provide follow-up on good ideas that came from the team.  Encouragement is done with both enthusiasm and to show confidence in the team that they can solve their issues. Empathy is important to show that it is OK to show emotions at work, and finally it is important that the team feels connected to each other (affiliation), so that they can create a bond that improves cooperation in the long term.

How can you MAKE WORK MORE MEANINGFUL?  Whether a task is meaningful, depends a lot on the perception of the person doing the job. As a manager, you can somewhat influence that perception by doing the following:
Implement ideas of your team. By listening to your team, and acting on their input, you show that you value their knowledge, which in turn leads to them valuing their own input.
Leave ownership with the team as much as possible. When people are responsible for actions, the perception of importance of that action grows. Of course, they need the earlier described resources and time to be able to finish their actions as well.
Prevent meaningless work. Linked to clear goals, it is important as a manager to share the work that has been done by your team and is used in the future. Nothing is as demotivating as working on a concept that will never see the light of day.
Make the job challenging. Whether the job is meaningful, also depends on the knowledge and experience of the person doing the job. When somebody is working below his or her level, the work feels as less important as when a person is challenged doing the same work.

To evaluate the described factors above, the authors propose the use of LEADER STANDARD WORK (of which I already wrote an article, and a full chapter in my book). To develop yourself as a manager, you should reflect every day whether you have positively influenced the inner-work life of your team members. A checklist can help you remember to do that.

During face-to-face moments, you can support and challenge them, and use the catalysts and nourishers described above. Contact moments are not for checking up on your team. Checking up on people has the opposite effect on inner-work life. So, to be clear: the goal is to check-in with people, not to check up on them.

The Progress principle describes the hidden importance of progress in management. Small successes during the day are of huge importance in improving the inner-work life of people, which in turn lead to higher productivity.
Interesting is, that managers who participated in the research study actually ranked progress as one of the least important factors of facilitating success, while progress was clearly the common denominator of success in the thousands of diary entrees that the authors collected from the participants.
When managers do not understand the importance of inner-work life and fail to support their team members in improving theirs, it is no surprise that 67% of the world-wide working population is not engaged in his or her work (Gallop, 2017). This book should therefore be mandatory for all everyone leading a team.