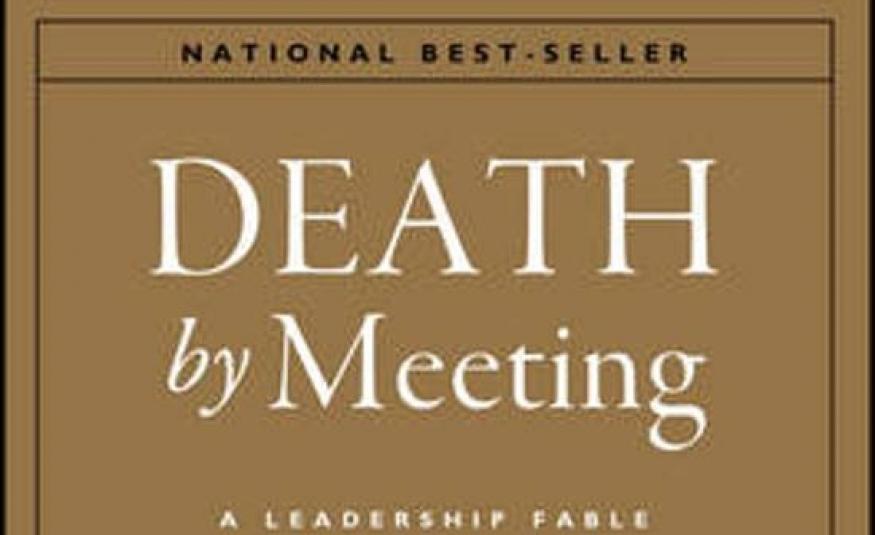 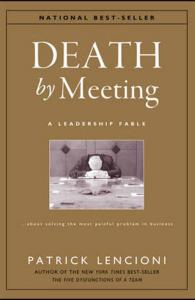 ´Death by meeting´ is a short fable about a company that designs virtual golf games. The owner of the company is a famous golf player and therefore has great knowledge on golf and which leads to super innovative and profitable products. Even though the sales figures are going through the roof, it turns out the management team is not as engaged and passionate about their work as before. When the company is bought by a bigger organization that then sends over an external manager, it turns out the problem of this lack of energy can be found in meetings.
Fortunately, there is the intern Will, who has studied at the film academy and can improve the meetings of the organization while constantly making references to the movie industry.

THE COMPARISONS BETWEEN MEETINGS AND MOVIES are a central team in this fable. How is it possible that people can be energized after a 1.5 hour movie which only felt like 10 minutes, while those same people leave 1.5 hour meetings demotivated and without energy?
This seems like a world op side down, cause movies are passive and meetings interactive. You cannot convince an actor in a movie not to go through a certain door in a certain scene, but you can influence the decisions that are made in meetings. How come we do not use this opportunity to influence the outcome?
First of all, Will explains, every movie has a hook. The hook covers the first ten minutes of the movie and is all about engaging the audience and making them want to watch the remaining 80 minutes. A short elevator pitch for the next topic would be a possible hook in a meeting. Everybody should be motivated to make certain decisions before the topic is brought to the table.
A second key element which makes a movie interesting is conflict. Conflict is what intrigues us to continue watching, whether it is conflict between two people, between people and nature, or even one person who is in conflict with him- or herself. One reason why meetings usually are energy draining is the lack of conflict. They just go on and on without any interesting discussion.
The second tip to improve the meetings is therefore to mine for conflict. The chair of the meeting has the important task to keep on asking questions and encourage people to talk about their doubts, which leads into more interesting discussions and finally to a decision which can be supported by the entire team.
Another topic that Will discusses is the variance in types of programs there are on television, each with a different goal. There is the 5-minute headline news which shortly addresses the most important topics for the day, the weekly 20-minute sit-coms (one theme) which you follow weekly, and every once in a while, you go to the cinema for a 90-minute movie covering one story. Will realizes, that in the current weekly meeting all of these different types of topics are discussed at the same time: operational, tactical and strategic themes combined. It is like Barack Obama discussing the white house Christmas lighting plans in the same meeting as the strategy to fight terrorism.

The proposed solution is A NEW MEETING CONCEPT with four types of meetings with each another frequency, goal and topics.
The daily check-in meeting takes only 5 minutes, is a stand-up meeting, and allows the team members to shortly align on today’s most important topics. When done properly, these 5 minutes per day will reduce multiple hours that used to be spent on e-mailing, calling and walking from office to office to shortly align on something.
The weekly tactical meeting takes one hour and does not have predefined agenda. All team members have one minute to talk about their highest priorities for that week and after all priorities are mentioned, the team decides for which of these points discussion is needed. When there are no team members who need help, the meeting is cut short. When themes are more of a strategic discussion, it is put on the agenda for the monthly meeting.
The monthly strategic meeting is a team meeting is a 2 to 3 hour meeting in which one or maximum two strategic themes are discussed in detail. An agenda and team member preparation is required for this meeting to succeed.
Finally, there is the three-monthly 2 day off site meeting in which the long term strategy as well as personnel issues of the team is discussed, combined with some team building. Be careful that the first two activities are the most important and that traveling to and from the off site location and the teambuilding do not take up too much of the time scheduled.

In the fable, the transformation to the new meeting structure brings some challenges to the team. Especially mining for conflict and addressing the different opinions is found difficult. Where conflicts used to be handled one on one in the boss his office, they now need to be discussed with the entire team present. But all team members agree: the meetings are much more interesting to go to and the management team has never been more energetic and effective.
in the end, the external manager is happy about the way the software organization is run and the founding father gets to keep his job as managing director.

How energizing are your meetings?

Coach yourself to Success - T.Miedaner (summary)