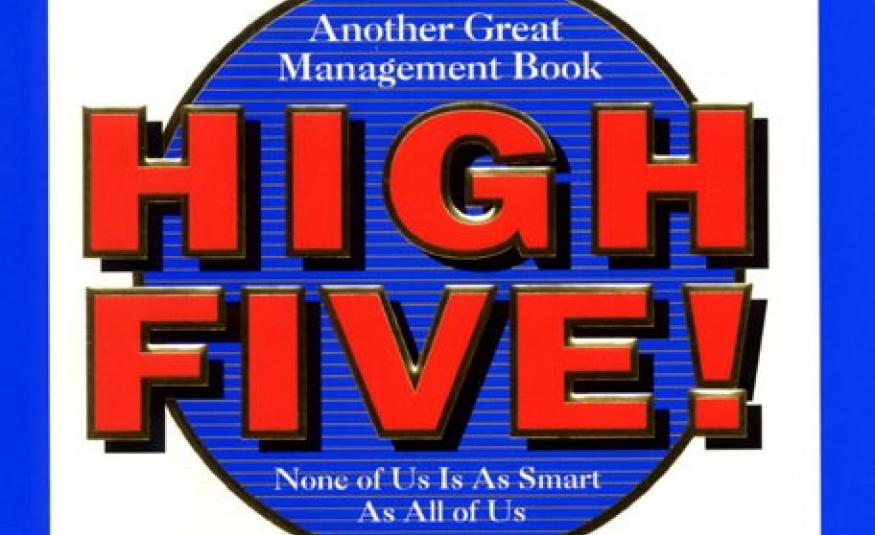 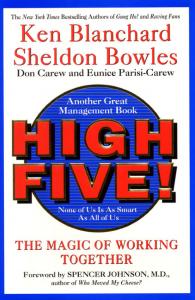 High Five! Is the third book by Blanchard and Bowles on team work. In this novel, main character Alan is fired from his job because he is not a team player, but immediately gets the chance to coach an ice hockey team on the same topic. Now that Alan has the opportunity to learn himself about team work, he searches advice from an old lady, and star in coaching, Miss Weatherby.
Weatherby teaches Alan, his fellow coaches and the boys of the ice hockey team the four keys of team success: purpose and values (1), developing skills (2), creating team power (3) and focusing on the positive (4).
This article describes a team and teamwork in general, and addresses all of the four secrets of High Five! shortly.

A TEAM is a corporation between different people who together achieve more than the sum of each person on its own.  A metaphor that the authors describe is the synergy between two headlights of a car. A headlight on his own can illuminate about 50 meters in front of you, but when you combine two headlights, you do not only see clearer within those first 50 meters, the combination of lights illuminates a longer distance: 80 meters.
A second metaphor, the link to the title of the book, is giving a high five. The moment two people clap their hands together in a high five, both people feel more energized afterwards. The amount of energy increases between the two. The link with team work is, that you cannot do a high five on your own. You need second person, hence, a team, to get this extra energy boost.
A practical example of teamwork is the cooperation of different functions in a hospital. One of the boys from the team gets injured, and the surgeon of the hospital explains that she can only do her job well, when her colleagues from others departments, for instance the X-ray department and the ambulance, do theirs properly as well, When the doctors in the ambulance have made wrong diagnosis, or the X-ray pictures are of bad quality, the surgeon cannot do a perfect job.
A second example of real life teams are sport teams. You need a combination of skills to get the team a head. History tells us, that when players only focus on themselves, the team never makes it far in the competition.

The first secret of team work is PURPOSE AND VALUES. What is the common goal of the team? A team needs a common direction to work towards to be able to strive. In a hospital, the goal is to make a patient better as soon as possible. Within sports, the goal can be to win a certain competition.
It is important for the goal to be made specific, and that it is defined how the team is going to cooperate to achieve it. These so called ´team rules´ are the behaviors that the team should show to be able to achieve the team goals.
There is no place for personal ego´s in the team. Every team member should set aside personal gain and focus on how to support the team and the common goal instead.

Secret number two describes DEVELOPING SKILLS within the team. With and for each team member, the coach should define personal goals. Within a high performing team, all individuals always have their personal goals which help them improve a certain skill every month, week and even every day.
These goals should be focused on behavior. In the example of the sports team, every team member should be able to achieve his or her personal goals, like passing the ball over to another team player more, even though the team did not win the game.
Finally, it is the task of the coach to give positive feedback only in relation to the personal goals. This increases self-confidence of the team members. The authors write, that lacking performance usually are not linked to a lack of skill, but simply the lack of a little encouragement.

The third secret of team work is CREATING TEAM POWER. The slogan that Miss Weatherby uses to describe the principle of team work is: none of us is as smart as all of us.
The power of the team can be found in the strategy in which team members discuss each other’s behavior, which creates synergy in the team, which results in better performance of all team members and thereby the team in general.
As a coach, you need to praise cooperation, and circulate leadership positions within the team, to increase the team power even more.

The fourth and final secret of team work is FOCCUSING ON THE POSTIVE. Miss Weatherby uses the 3R´s to explain this secret: Repeated Reward and Recognition.
The authors are firm believers in positively reinforcing desired behavior. This means that behavior that is defined in the game plan should be positively reinforces ad much as possible, to encourage more of this behavior. The thought behind this is that when team members show the desired behavior twice as often, the impact of not showing the behavior once has less impact on the overall performance.

High five is a short and clear book on improving team performance. Ken Blanchard and Sheldon Bowles explain the four secrets of team work in an easy way, which makes this little book a must read for all managers or wannabe managers.