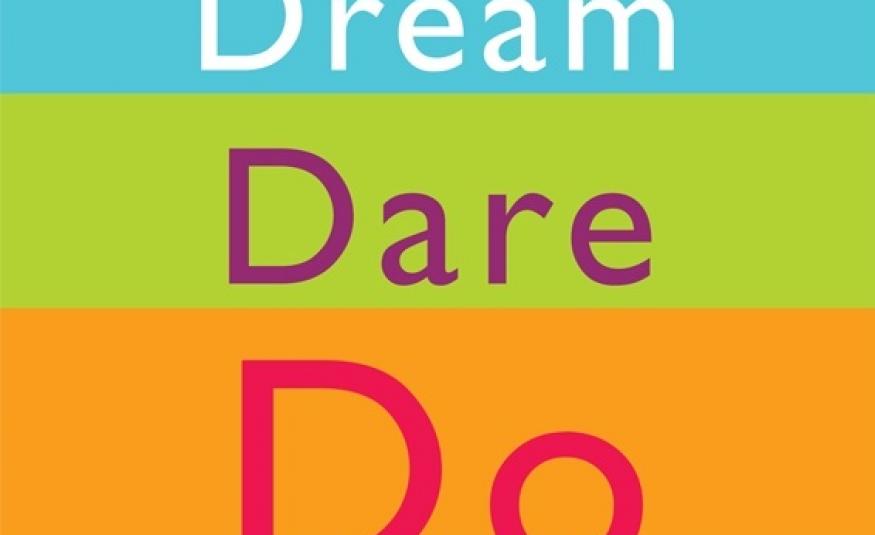 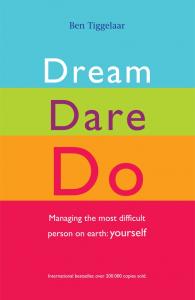 In his book Dream Dare Do, Ben Tiggelaar describes three steps to change personal behavior. Most people who have failed to change their behavior to give up smoking, finish that course, or to lose weight for example, have failed because they did not define concrete actions to achieve their goals in advance. Their good intentions already end in the first step of change: Dreaming…

In the first few chapters, the power of behavior is described. Behavior is the determining factor in being successful and happy. It´s not the goals you set yourself, not the plans you make, but the daily actions performed that not only makes the change happen, but also account for 40% of your sense of happiness (Sonja Lyubomirsky).
Research of Kanheman shows, that changes of loss are considered twice as big as chances of success. This means that thinking in chances or challenges instead of problems is not a good strategy. Thinking in problems motivates you to do really change something in your behavior twice as much.
Thirdly, Tiggelaar writes about the ratio of compliments and criticism in a human relationship. One bad experience can destroy years and years of good friendship. The same holds for business relations. The ratio between compliments and criticism to maintain a relationship should be 3:1. If you wish to improve a relationship, the ratio should be at least 4:1.

The remaining of the book describes the three steps for personal change into more detail: dream, dare and do. The first step, DREAM, consists of two aspects: determine your personal direction (1) and defining concrete goals (2).
The situation you want to create for yourself can be described using virtues and or circumstances. Examples of circumstances that are known to improve happiness are living in a certain area, being married or avoiding negative emotions. Circumstances that are known NOT to influence happiness are making more money, getting the ´best´ education and staying healthy. Virtues one can ´dream´ about can again be split in two categories, natural virtues (self-control, sensibility and bravery) and spiritual virtues (faith, hope and love).
Important in de Dream phase is to check if your personal beliefs are the right ones to achieve your goals. Three questions can be asked to think about your personal beliefs: is the belief the truth or just our image of the truth? (1), Is there nuance in the truth or is it absolutely true? (2), and probably the most important one: does this belief help you become a better and happier person? (3). If the answer to the third question is ´no´, you might think about changing your personal belief.
When you know have defined your personal direction, the second step is to specifically define your personal goals. What are the things you need to do to achieve your goals? Each intention should be defined using the MAP (Measurable, Active and Personal) method. Write down what you are going to do and how you can measure if you´ve succeeded. Tiggelaar describes that taking small steps are the easiest way to achieve your goals. Starting at the desired result perspective, you can define what steps you need to take to reach it. Every step can then be split into smaller and smaller steps, based on personal behavior, until you feel that you can easily implement the step.

The second step on your way to change is DARE, which mainly has to do with planning your (re)actions in certain situations. Most good intentions are forgotten in times of crisis, when people are tired or stressed. Research shows that making a pre-defined plan before starting on the goal, actually improves the changes of success with a factor 2 to 3. Within personal goals, it is adviced to predefine how you are going to respond in a possible situation, which makes it easier to stick to your plan.
When you have made a plan, three techniques can be used to stay on top of your behavior and handle difficult situations. Creating mnemonics, for instance by writing inspiring sentences in your Calendar, rewarding positive behavior and actively anticipating on your own behavior, like talking to yourself out loud to gain courage, or teaching yourself to visualize a certain image which helps you to stick to your goals. A simple example of visualization is imagining a very fat person every time you pass by a McDonalds, to help you to decide not to go in. An example of rewarding yourself is to start your to-do list with the actions you don´t like, so you can reward yourself with a more fun task later.

The third and final step is to DO. With trial and error you should practice with your new intended behaviors. When goals are measurable like proposed in the dream phase, one can easily evaluate whether or not the defined behavior helps you move in the right direction. Think about asking for feedback from your friends and colleagues, and reward yourself when you have reached a milestone.

The final chapter of the book discusses the question:  when are you done dreaming, daring and doing? The answer is simple: when you have reached your goal. You keep on going and going until you have reached your desired situation of feel that you live by your chosen virtue.
Tiggelaar describes the example of a child learning to ride bike. There is no parent who would tell his child to give up and simply accept that he or she will never ride a bike properly. As a parent you keep on encouraging your child to keep on trying until it can cycle without falling down. We should all do the same for our own personal goals.

One Small Step Can Change Your Life - R.Mauer (summary) 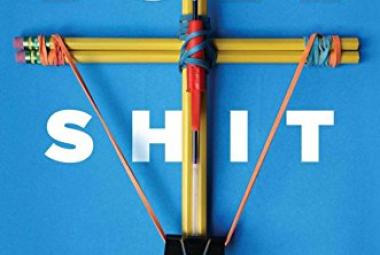 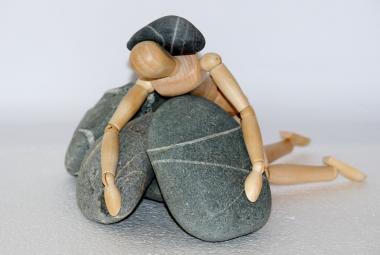