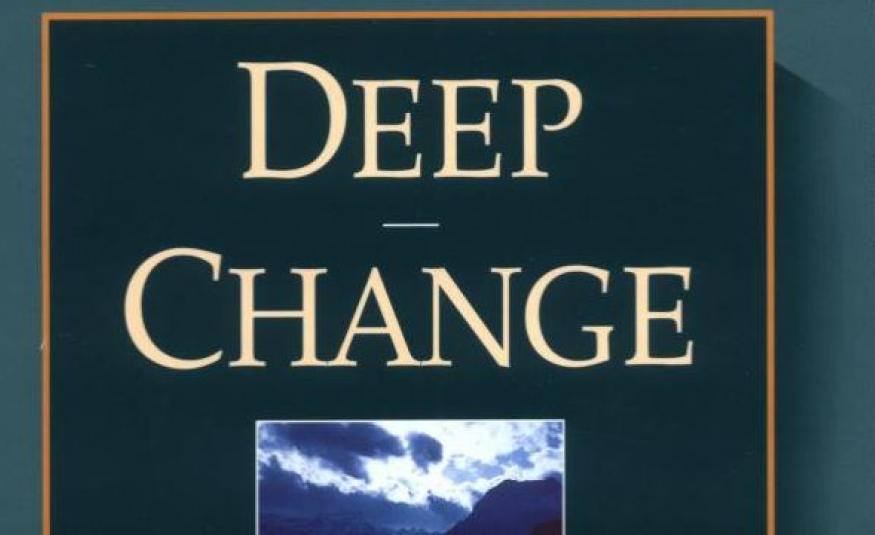 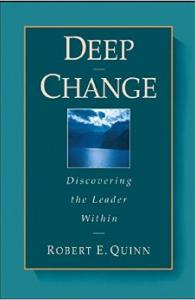 In Deep Change Robert E. Quinn describes the importance of profound personal and organizational change, to be able to move along with the changing world around us. Deep change means an irreversible, radical change that cannot be controlled from the outside but arises from within.
This book consists of four parts. Part 1 describes the importance of profound change and the possible consequence of not changing: slow death. Part 2 describes personal change, because an organization only changes when the people who move in it change. Part 3 describes Organizational change and part 4 describes different handles to create excellence in an organization.

Change, both personal and organizational, is necessary because the world around us is constantly changing. Each individual can choose between two possibilities: go along with the change, which means that the individual has to endure profound change, or what Quinn describes: THE ROAD OF SLOW DEATH.
The road of slow death has a number of landmarks. One of the most common is collective denial. Almost everyone in the organization knows that the current way of working is not good enough to guarantee the future of the organization, but nobody talks about it or does something about it.
Trust is damaged because people opt for personal gain instead of collective gain. Own objectives or departmental objectives are raised above the collective, which leads to people working against each other, which then leads to a lack of positive energy to work.
The lack of energy can eventually result in burnouts among employees. A burnout in this case is an extreme way of the body and mind to indicate that the current way of working is really not good. Despite these signals, people prefer to remain 'busy' rather than going into the process of personal change.

An organization cannot change without the people in that organization changing. That is why PERSONAL CHANGE is needed to change an organization. Change has to do with learning, self-reflection and wanting to change. Not a colleague, not a manager, but yourself. Continuous, personal change is, according to Quinn, one of the keys to leadership in change management and, moreover, the key to preventing a burnout.
Continuing to learn and reflect means to overcome denial. It is never fun to hear painful information about yourself, suggesting that we have to change, but not changing contributes to the process of slow death.
One way to monitor on which of the roads someone is, is to regularly reflect on their own sense of vitality. Learning and processing new impressions gives people energy and a lack of energy can therefore be a signal that the individual does not learn enough.

After personal change Quinn describes the importance of ORGANIZATIONAL CHANGE. To initiate this change, he describes 3 paradigms of organizational life, in which a distinction is made between the Technical, the Transaction and the Transformation Paradigm.
The Technical paradigm describes the individuals in an organization that each contributes to the organization as a whole. The highest priority of the individual in this paradigm is personal survival, which means he takes little to no risk (and therefore learns little). Power is based on technical competences and credibility of the person is mainly influenced by the technical standards that the person holds.
Managers act in the Transaction paradigm. Managers, like the individuals in the Technical paradigm, set their own survival above the health of the entire organization. They use a political system in which power is acquired by carrying out transactions as efficiently as possible. The power of the manager is based on authority, the official position of the manager in the hierarchical structure.
The Transforming paradigm is the paradigm in which leaders move and describe the paradigm in which profound change can occur in an organization. Leaders dare to take high risks, in contrast to individual contributors and managers, to achieve the organization's vision, even if it is not in their personal interest. Leaders act in a moral system where the source of power are the values they live up to. Credibility preserves the leader by acting with integrity.
To dare to take risks as a person, to do what is right in that moment, even if the total deviates from the current systems and procedures, is what distinguishes leaders from managers. This requires continuous reflection and personal change, in order to respond to the situations of this moment from all leaders.

But how is EXCELLENCE CREATED? Quinn describes that the biggest problem that stops excellence are the current systems and procedures. Procedures and structures are designed to maintain a standard in the organization, not to support changing it, though they are needed as a foundation for improvement. Three barriers that lead to that people prefer to conform as risks include bureaucracy, conflicts between colleagues and departments and the I-have-no-time for improving syndrome.
To lead an organization and lead people out of the conforming mode, Quinn describes four leadership roles, each operating in a different domain. The four leadership roles, Motivator, Vision Designer, Analyst and Teacher are shown in Figure 1, in a quadrant with stability and flexibility on the vertical axis. A good Leader acts in the upper two quadrants, which together describes the transforming paradigm, to bring changes. A good manager acts in the bottom two quadrants, the transnational paradigm to ensure stability. A good CEO can fulfil all four roles. Quinn places high demands on a CEO, who should be able to fulfil all 4 roles.

The world around us is constantly changing. In order to be able to change with the environment as an organization, profound change is needed, change that is irreversible and must also arise from within. This change from within is caused by a profound personal change of the employees in the organization. It is the role of the leaders to create a clear vision and motivate the employees to dare to undergo this profound personal change, to break the traditional culture of conformity.